What is Now Lifestyle?

What is NOW Lifestyle?

Now Lifestyle is one of many projects owned and operated by Joel Therien.

In some ways, it’s almost an exact replica of 7-Minute Workout, another one of Joel Therien’s projects that have a strong emphasis on combining the fitness industry with the money-making industry.

Now Lifestyle is a network marketing company whose core products are fitness related (the 7-Minute Workout program that was carried over from the original MLM brand of the same name) and Internet marketing tools (the email autoresponder called Send Shark, which is very similar to Joel’s other autoresponder software called GVO).

In fact, you might say Now Lifestyle is a new and improved reboot of Joel’s earlier work.

Not that that’s a bad thing. Re branding has it’s purposes that benefit the owner as well as the marketers, which I’ll get into later.

I’ve never seen this before. You can can actually buy sign ups.

You pay a set price, which at the time that this article was written, was $40 per guaranteed sign up, available in sets of five. The company advertises on your behalf until the number of sign ups that you purchased is fulfilled.

As far as I know, NLS is the first and only MLM company to do this.

If your recruit gets buyer’s remorse and decides to quit shortly after he signs up, the company will not replace him. It’s not entirely risk free, but I still feel this deal is a steal at this price.

Now Lifestyle is different. I’ve found that with most network marketing companies, you make money by referring other people who want to make money or by selling the products.

If you’re trying to recruit someone who is already in a company, you won’t make money from them unless you give them a good reason to leave their company and switch to yours.

Something I really like about Now Lifestyle is that no one has to leave their present company for you to do business with them because their product line covers three distinct categories.

(1) There’s the network marketing system, of course, but you can (2) sell the workout system as a standalone product to people who want to get fit. And then there’s (3) the autoresponder, Send Shark, that allows you to make money from people who might not want to switch businesses completely, but still need a way to follow up with their prospects from other businesses.

Send Shark is awesome because it keeps you close to other Internet marketers. They might not be in the market for a new opportunity now, but who knows. Maybe in a few months, they will be, and Send Shark is an awesome way for you to provide value, give them a reason to stay in touch, and make money from someone who might not have had any reason to do business with you otherwise.

… the name implies living a better lifestyle, which is something we all want. They do that by improving your health and financial stability at the same time.

I thought re-branding what is virtually the same business under a different name was very smart.

It’s still using the same workout system from before. In fact, all the workout videos are the same videos that were used in 7-Minute Workout. They still mention 7MW throughout the demos.

The difference is that when you hear the name of the company, instead of thinking it’s yet another weight loss gimmick, you think of living it up as a sexy, fit, entrepreneur who has money to do whatever you want.

Everything you need is within the back office

Now Lifestyle stands out from other MLM companies because it was made by a network marketer for other network marketers. Joel Therien knows follow-up is extremely important.

Instead of making you buy an autoresponder from companies like Aweber, Get Response, or Mail Chimp, he includes Send Shark with your membership.

Send Shark is actually what brought me back to NLS. I’d quit NLS to promote a business opportunity that I thought was better.

A few weeks later, I saw an ad for Send Shark. I was happy with Aweber, but Send Shark costs way less when you start getting into the higher numbers.

In addition to email, they also offer paid sign ups, a customizable lead capture system, tracking tools, and some of the best videos on mindset that I’ve ever seen.

Some people will feel tempted to skip the mindset videos, but personally I think that’s where most people need to start and continue to watch again every month or two just to refresh their memories.

As a person who has struggled in the past with network marketing just like everyone else who has tried it, I can understand the appeal of having this feature.

The main thing I can’t stand about it is that it’s not available enough. You really have to be lucky to just happen to log in at the right time when it’s available and buy before they take it down again.

They are constantly testing what’s working, which is a good thing because it ensures they’re delivering the goods, but it can be frustrating waiting for an opportunity to take advantage of this feature.

During my time with the company, I got very familiar with this very irritating sign. 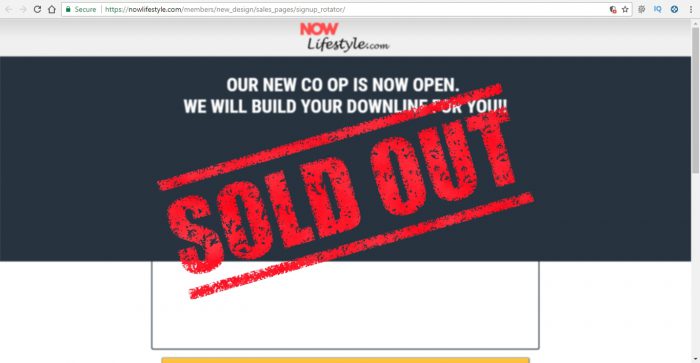 $170 a Month for Nutritional Supplements? Really?

I’m not the biggest fan of supplements to begin with. I’m not going to get into why because that’s a totally different topic, but if we’re going to buy supplements, they should be reasonably priced.

NLS prices seem to be a lot higher than what you’d find in a nutrition store. They’ll say it’s because it’s a higher quality, but really it’s to cover payouts on commissions.

They want you to make them money, yet they charge to teach you how to do it

One thing that perplexes me is that they have insider training on a variety of marketing topics to help turn you into a super recruiter.

What I don’t understand is that some of this training costs an additional fee to get it. We’re not talking about light change either. This info can cost up to $2500!

On top of that, it’s only commissionable if you own it. That means if someone you refer buys it and you haven’t bought it yourself, you can’t get a commission from it.

That method of marketing is a throw-back to the golden years of Empower Network when David Wood and Dave Sharp started the trend. It seemed like genius back then, but now I’m seeing it for what it really is: a way to milk extra money out of their members.

It’s challenging enough to make money online even when you know what you’re doing. They shouldn’t be charging a sign up fee and then charging an extra 4 figures to teach you how to sell their products and services. What kind of sense does that make?

In their defense, they do have a great tutorial for getting into the money quickly under the “Grow your Business” tab, so it’s not like they’re leaving you to fend for yourself unless you upgrade.

Who is Now Lifestyle For?

This company is great for a variety of people

Whey Protein – Comes in chocolate and vanilla with 24-26 grams of protein per serving.

Eliminate – Fiber capsules with about 1 gram of fiber per serving of three capsules.

Elevate – This is Now Lifestyle’s vitamin supplement. It has a major emphasis on energy, which I guess is the reason for the name. Most of its ingredients and B vitamin